Design a site like this with WordPress.com
Get started
Skip to content
Date: August 9, 2021Author: (Kitty) Cat Strawberry - Meow! 2 Comments

Today I’m excited to welcome you to my stop on the blog tour for Foul Play: Once Upon a Crime, a murder mystery card game which is so fun to play!  My review and details about the game including the inspiration behind it, can be seen below but I just wanted to say a big thank you first to Zoé from Zooloo Book Tours and After Dark for a copy of and chance to play this game!

Description:  Carabosse the Bad Fairy is dead, and her Big Book of Villainy has been stolen…
In a shocking revelation, the magic mirror has revealed that all the suspects are goodies, but who had a motive to go bad? You’ll need to swap, steal and search for the evidence in order to scupper the other detectives and sleuth your way to your happily ever after!
There’s more than one way to catch a killer though. So what’s it gonna be? Good Cop or Bad Cop? These two game versions come with their own set of rules and tactics to crack the case and finger your suspect, but will you use fair play or FOUL PLAY?
The Game is Afoot! Playing as detective, you’ll need to find the three evidence cards that point to a specific suspect in order to catch a killer in this crazy criminal caper. Will you uncover them in the crime scene? Could the other detectives be willing to collaborate and share their findings? Or will you resort to more tricky tactics, and plunder the proof you need to solve this crime?

Review: This is such a fun card game and with two different modes to play in, it makes for a very fun game you can play with friends or family again and again.  Foul Play: Once Upon A Crime is a murder mystery card game where you try to find out who committed the crime.  All of the suspects are fairy tale goodies, like Goldilocks, Dick Whittington and Prnce Charming, etc. and you have to use the cards in your hand and your own skills to solve the crime.

In Good Cop mode there are three pieces of evidence, things like the suspect is wearing a gold ring,  has a star, etc. and these three pieces of evidence will match up with one of the goodies in the game.  Each goodie card shows the character with things like jewellery, weapons and animal companions clearly shown and it’s these extras that count as the evidence to put away the culprit.

When you play in Good Cop mode you must find out what the three pieces of evidence are and see which of the suspects matches the evidence.  At the start of the game you shuffle the deck and are given a set of cards each, with the rest of the cards others arranged in a crime scene in front of you and a stock and discard piles on either side of the crime scene.  The game involves taking turns to play your cards, with the ultimate goal of working out what all of the evidence is and holding a suspect card in your hand before declaring that you know who has committed the crime.  I couldn’t help but feel like Good Cop mode was a bit of a card game equivalent of cluedo although much funnier as you get blocked by other players from making your guesses, you swap or steal their cards or cards from the crime scene and you can even lose all the cards in your hand right before you were due to win!  It’s this aspect of the game, and these fun extra cards in the deck which allow you to play all these moves and which makes the game so fun and interesting too!

Bad Cop mode is similar to Good Cop in how it’s set up except that there are multiple pieces of evidence in the game and instead of trying to guess who committed the crime, you simply try to match three different pieces of evidence to any one of the suspects.  This game mode made for a faster and more exciting game and I have to say that me and my family couldn’t help but want to keep playing Bad Cop mode, seeing how fast someone could win the game, which in some cases was very fast!  Playing in Bad Cop mode felt somehow more freeing and silly too as sometimes you’d begin with all the evidence cards in your hand that you needed to frame a suspect but needed to find that suspect card, or in one turn I’d ended up with no evidence cards but almost all the suspects!  It definitely felt like a faster and more fun game mode although both modes are equally good to try and it’s goodand fun to have more than one way to play this game.

The cards are well made on good quality card with smoothed edges and I just love the details in the illustrations.  There’s something so fun about the way all of the goodies look, none of them looking so goodie anymore, and if you take some time to look at them you can see how multiple goodie suspects can fit the different pieces of evidence in the game.

After playing Foul Play: Once Upon A Crime I would recommend this game to anyone who loves a good card game and having some fun and laughs.  I already have my eye on getting The Manor House Murder which is the other Foul Play card game that you can purchase from their website.  It’s definitely a fun game and one that I’m sure lots of children and adults will enjoy playing.  And Once you learn how to play, which does take a bit of time, but it’s not too hard, it’s a very fun game and one that will lead to a lot of re-plays, especially if you like to play in Bad Cop mode like me! 🙂 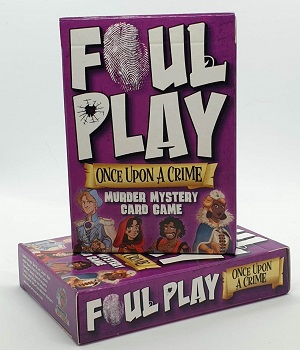 The History of Foul Play

What’s a Murder Mystery Events Company to do?

With a pandemic sweeping the nation and no sign of being able to perform their confounding criminal cabarets or incredible interactive investigations any time soon, they needed to come up with a plan, another way to provide mystery to the masses (and provide income to keep themselves afloat)!

Well, lockdown does strange things to people, especially actors who can’t go out and perform. So one fateful evening, Ben & Lee Cooper-Muir decided to come up with a whole new way to murder people. Keeping their cards close to their chests they plotted and schemed until Foul Play : The Murder Mystery Card Game was born. So, what to do next? This is where After Dark enters the picture. After all, Ben and Lee were two of the operators of the infamous murder mystery company. Maybe they could collaborate to bring the game to the masses. When Lockdown restrictions were eased a top-secret meeting was held with the other criminal masterminds behind After Dark, Helen Burrows, Sophie Webster & Tom Fisher and a pact was made. The game would be launched and licensed under the After Dark banner. In true After Dark style, the team burst into action and then began the beta testing, design updates, promotional planning, character changes, proofing, proofing and more proofing until finally all the kinks were ironed out, mysteries solved, and FOUL PLAY : Manor House Murder came to life!

The team didn’t stop there though! Due to the popularity of the first game, a second version ‘Once Upon A Crime’ was put on the table, designed, and then launched on Kickstarter. Fully funded in under 48 hours the team at After Dark had another success on their hands and players had another

murder in theirs! Once Upon A Crime hits the stores on 1st July 2021 and Manor House Murder is available to buy too.

We hope you enjoy playing it, and although we all hope to be back performing soon, WATCH THIS SPACE! Now we know we can create and produce games we’ve got a lot more fun things planned for the future!

I hope you’ve enjoyed my stop on the blog tour for this brilliant and very fun card game.  Please do check out the others stops on this tour and get yourself a pack of these cards if you think you’d enjoy it. 🙂

What do you think of this game?  Do you like playing card games?  Let me know what you think in the comments below 🙂