Design a site like this with WordPress.com
Get started
Skip to content
Date: November 2, 2022Author: (Kitty) Cat Strawberry - Meow! 0 Comments

Today I’m pleased to welcome Karen Ferguson to the blog, the author of My Life with a Sociopath: It Can Hpppen to Anyone. It’s an interesting non-fiction read and one which I think everyone should give a go to see the warning signs of sociopathy and how easy it is to end up in a relationship with such a person without even realising it.  I’ve already read this book and you can check out my review of this interesting read by clicking here, and you can see more about the author and her book below after the interview, but first let’s let Karen tell us more about the book, her inspiration behind it and what she’s doing now…

Can you tell us a bit about your book and what inspired it?  ​

My book is about my life and in particular, the last two years of it, with my abusive and suspected sociopathic (soon to be) ex-husband.  I was inspired to write it because I wanted to highlight how easy it is to find yourself in an abusive relationship and not even know it.  My aim was to point out red flags and subtleties of abusive behaviour in the hope that others may be able to spot the signs and either leave sooner or not find themselves in abusive relationships in the first place.​

I love the format of the book mainly showing the text message conversations you had with your husband.  Why did you choose to write the book in this way?

​I wrote my book using the actual text messages because I thought it was the best way to demonstrate exactly what went on.  I don’t think it would have had such a great impact if it had just been me telling my story.  The drip drip effect of these messages shows how his actions worked to wear me down and you can see exactly how he went from okay to nasty in seconds.

Were there any parts that were especially difficult to write?

​There were two aspects that I found difficult.  Initially, reading the messages one after the other really showed me how much I had been through because I genuinely hadn’t realised until I read almost two years’ worth of messages in one sitting.  I kept getting distressed and walking away.  The only way I could deal with it was to decide I was writing it as a theoretical exercise and simply taking information from one place and moving it another.  That really helped.   The other hard part was reading the often-sexual element of his messages.  I explained in the book why I hadn’t included all of these messages, and simply it was because I felt sick at some of his comments and quite frankly mortified at the idea of anyone reading some of them.

What is the one thing you hope those reading it will take away from this book?

​I want people to feel more educated about the subject of domestic abuse.  How it isn’t just physical violence, how victims aren’t stupid, weak or uneducated.  That abuse can happen to anyone and mostly I hope that my experience provides enough honesty that others may educate themselves and hopefully avoid finding themselves in a similar situation.

Are you working on anything new either writing or to do with the subject of the book?  ​

I am about half way through my first novel, have been a co-author in two other books, both being released in October 2022.  I am also hoping to work with other abuse survivors to create a collaborative book, which will allow them to tell their story as well.

What do you like to do in your spare time?  ​

I do a lot of writing and have recently started an online magazine aimed at women aged 40+.  This has allowed me to continue to write on a variety of subjects and work with others who also submit their stories and articles.  I also get to be artistic (digitally) and I really love this aspect.

What is the best thing about being an author?

​The idea that what I have written may resonate with or help someone else.

If you could live in any book which would it be and why?

​That’s a really tough question because historically at least I have read a lot of crime and horror books and I really wouldn’t want to live in any of those.  I guess the Famous Five springs to mind, the innocence and adventure of it all.  Maybe Swallows and Amazons for the same reason.  Or perhaps one in which I could work with Sherlock Holmes, preferably the version played by Benedict Cumberbatch.  Maybe when I finish my novel, that is the book I would choose to live in because in many ways it would be my ideal life.

Thank you so much for answering my questions today and I agree it would be fun to live alongside a Benedict Cumberbatch Sherlock Holmes! 🙂

It started with a comment on social media, actually that’s not true, it had started long before then, but that comment led to a message, which led to several calls and ended with him driving his car into my house.
Through the use of genuine text message, I’ve opened up my life to show what I went through in the last two years, with an aggressive, lying, steaing, borderline alcoholic sociopathic husband.
#mylifewithasociopath is an important read, to show that this really can happen to anyone, to educate people on the signs to look for, what you can do to protect yourself and how to find the strength to end this type of relationship.
My Life with a Sociopath gives you access to the raw, unedited messages between me and my husband, which together with my honest commentary, provides an insight into psychological abuse.  I hope that it may help those who find themselves in a similar situation and will be a voice for those who may have lost theirs. 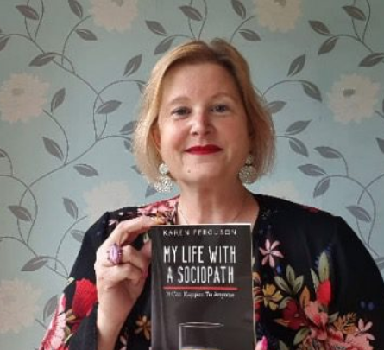 Karen Ferguson is a Women’s Confidence Coach, a Global Mission Ambassador for Stand Up Survivor, a Mo2vate Magazine Inspirational Woman 2022 Winner, is currently working on her first novel and will be a co-author of a book called In The Midst of Chaos which is due to be released in October 2022.

Did you like this interview?  Have you ever come across someone who seems to be a sociopath?  Let me know what you think in the comments below 🙂

Content on this site is the copyright ©The Strawberry Post 2018-2023.  All rights reserved.  No part of this website including images or text may be copied or reproduced anywhere without the prior written consent of the owner/creator.