Today is my stop on the blog tour for the third book in The Eagle of Mercia Chronicles series Warrior of Mercia.  I’ve been enjoying this historical fiction series and this book doesn’t disappoint in continuing Icel’s story.  You can find out more about why I have enjoyed this book so much in the review below along with more details about the book and author, but first I’d just like to say a huge thank you to the publisher and Rachel’s Random Resources for a copy of this book and the chance to be a part of the tour! 🙂  Now, let’s find out how much I enjoyed this…

Description:  Icel is a lone wolf no more.
Oath sworn to Wiglaf, King of Mercia and acknowledged as a member of Ealdorman Ælfstan’s warrior band, Icelcontinues to forge his own destiny on the path to becoming the Warrior of Mercia.
With King Ecgberht of Wessex defeated and Londonium back under Mercian control, the Wessex invasion of Mercia is over.
But the Wessex king was never Mercia’s only enemy. An unknown danger lurks in the form of merciless Viking raiders, who set their sightson infiltrating the waterways of the traitorous breakaway kingdom of the East Angles, within touching distance of Mercia’s eastern borders.
Icel must journey to the kingdom of the East Angles and unite against a common enemy to ensure Mercia’s hard-won freedom prevails.

Review:  Wow, this series just gets better and better!  Having fought off the Wessex forces in Londonia, Icel along with King Wiglaf’s men return to Tamworth for the cold winter.  But while the winter stretches on in  Tamworth, it becomes clear that Icel is still despised by the king’s son and king’s wife, and has to be careful not to get into trouble.  Keeping his head down and trying not to draw attention to himself, Icel tries to avoid any problems, but soon the king’s men are called upon to travel towards the kingdom of East Anglia, and it seems there’s more than just the neighbouring kingdom to be wary of.

This is such a brilliant story and I can’t believe how much I’ve enjoyed this third instalment in the Eagle of Mercia Chronicles!  After the bloody battle fought in Londonia, Icel and most of the king’s forces arrive back in Tamworth for the cold winter.  As Icel spends time in Tamworth with Wynflaed and Cuthred, catching up on what he’s missed while away, it’s clear that the queen and her son still despise him more and more, and something soon happens between Icel and Edwin, his former friend too.  I like how this third book returns to the events happening around Tamworth rather than focusing solely on one area of battle like the previous book did.  While Icel finds himself becoming a better and more respected warrior, he’s also becoming more hated by the queen and her son Wigmund for the same reasons.

I like what happens while Icel is not only dealing with what is happening to him in Tamworth but also how he ends up meeting and having some interesting conversations with a few people from the past like Lady Cynehild, and how he’s also trying to work out a key piece of information about his past.  The story is interesting throughout and I like how there are some lighter moments of humour throughout the book even though the majority of it is a more serious.  When the king’s forces have to march out once again from Tamworth during the late winter, it becomes clear that Mercia is threatened with more than one foe.  I like what happens as Icel becomes instrumental in several battles during this trip and what ends up happening with the other foe as well as the East Anglians.

The build up towards the ending is really good.  I didn’t know what to expect but it was such a good build up and the ending is really good too.  The final battle is quite a scene, bloody, gory and also so brilliant especially right at the end and I like what happens and how everything concludes in the final chapter too.  The book has the occasional use of the s and b swear words and mentions several deaths, killings and some blood and more gory scenes, although it doesn’t feel as gory as the second book in the series which I liked as there’s only so much gore I can handle personally.

The book has some information about the kings of Mercia at the start of the book as well as more at the back and I really love the map illustrations which brings the area to life.  There is also a very helpful ‘The Story so Far’ section which I appreciate as key things can sometimes be forgotten when reading this and it does make it easier for those who are picking up the series mid-way to begin reading, although of course I would recommend reading this series from the start to really enjoy and understand Icel and some of the other characters too.  There are some notes at the end of the book which I liked reading too as they help you know what is fact and what is fiction as well as some interesting information on Saxon churches which I didn’t know.  The story ends in a good way but that last scene leavs you wanting to read the next book in the series which I’m so eager and can’t wait for!!

Overall this is such a brilliant third instalment in the series following young sixteen-year-old Icel and I can’t wait to read more.  I would recommend this book to anyone interested in historical fiction set in the early medieval times, and would recommend the whole series so far too.  This book focuses more on Icel and certain aspects of his life rather than just being focused on the battles (like in the first book), although there is a good few battles in here too, and I do feel as if Icel’s character is developing and growing more in this story which I like, and I am curious as to where the his tale will go next! 🙂 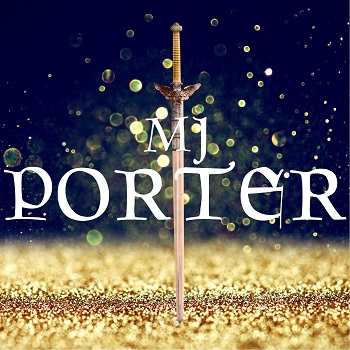 MJ Porter is the author of many historical novels set predominantly in Seventh to Eleventh-Century England, and in Viking Age Denmark. They were raised in the shadow of a building that they believed housed the bones of long-dead Kings of Mercia –so their writing destiny was set. The first novel in their new Anglo-Saxon series for Boldwood Son of Mercia was published in February 2022.

I hope you’ve enjoyed my stop on the blog tour today for this great book.  Please do check out the other stops on the tour by seeing the banner below or searching for #WarriorOfMercia on social media! 🙂 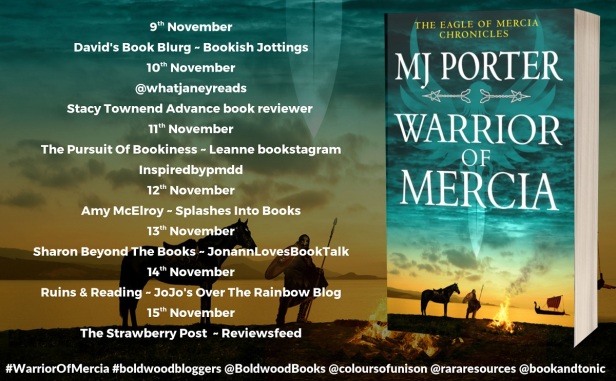 What do you think of this book?  Have you read any books by M J Porter?  Let me know what you think in the comments below 🙂